This game was back and forth from beginning to end. Junior starter Kevin Bailey was hot this game, dropping 24 points and 3 steals. For some unknown reason, Reveno dispatched with his regular YMCA style equal minutes for all strategy and went nuts playing Bailey 40 minutes (career high) and playing Freshman Alec Wintering 38 minutes (career high)! Pilots were up by 8 at halftime after a last second corner three from Bailey but managed to give that back in the second half. All game they had trouble stopping Center Mark Tollefsen of the Dons, he had 22 points on 9-11 shooting (nothing worse than being schooled by a dude wearing a T-shirt under his jersey not named Shaq). This one went to overtime after Chris Adams from the Dons hit a crazy three at the end of regulation. The Pilots were pretty much done from there and got grinded out. Alec Wintering had a season high 13 assists Saturday night, it seems like he is the lone guy at PG Reveno trusts with the ball anymore. If he continues to put up these numbers, he could make a run up the Pilot’s all-time assist leaders list. Suck on that Erik Spoelstra (#3 on list). If Wintering could consistently hit the three, he could have a real career ahead of him (overseas…..). David Carr got a DNP tonight (whether he is injured or on Reveno’s shitlist is unclear).

Dampen your hopes Pilot fans, if we can’t beat at home, then this season is going to be sketchy. 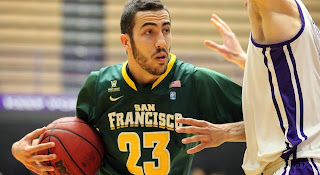